Chiefs Checking Out a Punter

Share All sharing options for: Chiefs Checking Out a Punter 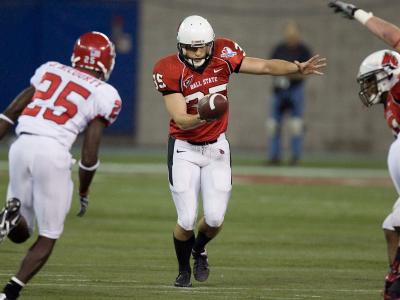 The Kansas City Chiefs are deciding whether to sign a punter.  Chris Miller, out of Ball State, is currently an undrafted free agent prospect.  He's been offered an invite to the Chicago Bears rookie camp but might be waiting to hear if the Chiefs make an offer.

He has an offer to attend the Bears' rookie camp this weekend. Chicago's punter is 13-year veteran Brad Maynard, a former Ball State star.But the Chiefs are considering a plan to sign Miller, and he'll find out their decision by the end of the week.

Problem with Miller, however, is that he's just a punter and doesn't do kickoffs or field goals.  Chiefs' Mr. Irrelevant Ryan Succup has experience both as a kicker and a punter.

It's not like punter is a position where you just need bodies for training camp like linebacker and offensive linemen.  Maybe I'm putting too much thought into this but I don't understand the value of having an extra punter around.  It's not like it matters, though really, with the loss of NFL Europe teams now can't carry extra players that are exempt from the roster limit.  And those roster cuts are coming at the expense of extra kickers and punters.

Ultimately I see Connor Barth and Succop competing for the kicking job and Dustin Colquitt having already secured the punting job.