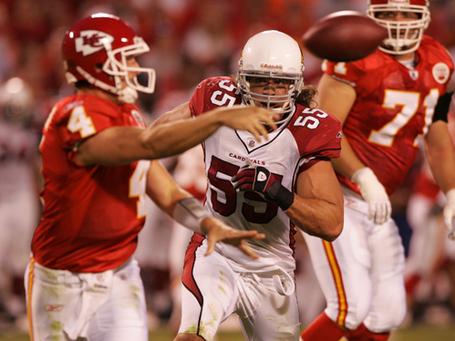 A theme that we've noticed developing around the Kansas City Chiefs new regime as far as it's hiring practices goes is " It's who you know, not what you know".

LaBoy is a former defensive end for the Arizona Cardinals having been released yesterday.  He would be considered a solid free agent on February 27th, the start of free agency.  But to have an unrestricted shot at him now is excellent news for teams seeking to bulk up their defensive line.

LaBoy is 6'3", 260 pounds and as a six year veteran is 27 years old.  He fulfilled the "predator" role on Pendergast's 3-4/4-3 hybrid defense in Arizona, a position the Chiefs might not have solidified on staff already.  Here's a piece done on him last year after he sacked Chiefs' quarterbacks twice and tackled four for loss in a preseason game:

LaBoy plays the team's hybrid predator position, a combination defensive end/linebacker. Because he starts from a standing or "up" position, the Cardinals generally refer to this as a linebacker spot. But opponents refer to it as a defensive end, linebackers coach Bill Davis said.

He was so effective in that role that teams rushed at the right end only 34 times - good for 8th best in the NFL.

Davis goes on to say that the biggest difference for LaBoy coming from a 4-3 end position is that he's standing up instead of having a hand on the ground.  His biggest job is to rush the passer.  Coverage skills are nice but likely don't effect the predator's goal - getting to the passer.

Check out a link to his KFFL page.  Questionable.  Limited in practice.  Injured.

Injuries abound. In fact, he's coming off a torn biceps tendon injury.  I don't know much about the specifics of the injury but I do know he underwent surgery following the Super Bowl. I do know that it's the same injury that Brett Favre had at the end of last season.  I do know it ended the season of Tom Nalen (Broncos '08), Jason Ferguson (Cowboys '07) and Aaron Smith (Steelers '07).  It's still a real possibility that LaBoy is nursing an injury.

If he's still seriously injured and unable to practice then I don't see the Chiefs (or anyone else for that matter) signing him.  He needs to be 100% for a team to take a chance on him.  That said, we still haven't found any sort of update on these concerns.

Todd Haley hasn't shown any hesitation in swiping guys he knows from the Arizona Super Bowl team.  Pendergast and Carthon (who holds the distinction of completing all points in the Pioli/Haley/Parcells connection) both followed Haley from Arizona.  You've got two offensive coaches that lined up against him in practice and the defensive coach that prepped him every week.

This is a strong Chiefs connection.

Why not the Chiefs?

We're hearing more players say they want to come to Kansas City. It usually comes down to money, but previously at times the Chiefs weren't considered because former GM Carl Peterson was an unpopular negotiator.  Not so anymore.

Monty Beisel, a former member of the Cardinals' linebacker crew with LaBoy, said he's excited about what's ahead for the Chiefs with Haley and Pioli running the show.  Bobby Engram said he was excited about Matt Cassel and the things the Chiefs had to offer.  Zach Thomas chose the Chiefs over the Jets.

This pick makes sense for a lot of reasons and would probably be an upgrade for the defense.  However, I don't see the Chiefs making a run at LaBoy for two reasons: injuries and the draft.

We talked about his injuries above.  He's been consistently dinged up throughout his career. There's an old saying that 80% of life is just showing up - LaBoy's not that guarantee.

The Chiefs didn't select a linebacker in the 2009 NFL Draft.  Do you really think they banked on a solid veteran free agent option like LaBoy coming up?  Not likely.  So they added a few ingredients to the oven (Vrabel, Thomas) so they could cook for the 2009 season.  I think the chefs are happy with the final product.

LaBoy wasn't in the Chiefs' plans prior to the draft and I think the coaches will feel they're ready without him.