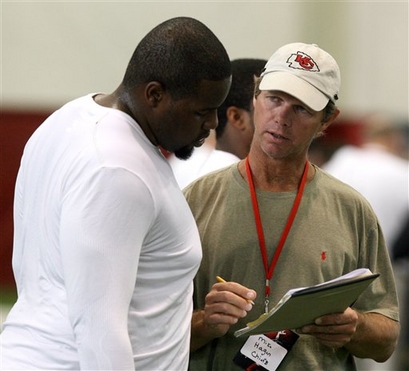 When Scott Pioli was hired on January 13th, 2009, many of us assumed he was handcuffed to the Kansas City Chiefs current scouting staff because the draft was so near.

I previously chronicled the fate of the Chiefs coaching staff days after Pioli's hiring.  Pro Football Weekly has the scoop on the latest news about the Chiefs scouting department:

Monday was D-Day in the Chiefs' scouting department, as the vast majority of the staff was released by GM Scott Pioli, according to multiple sources.

Not that surprising considering their previous record with Carl Peterson, but just another reminder that no one's job is safe.

It's unclear which employees have been terminated.  Quick note about Chuck Cook - he's been with the organization for 25 years, 12 as a scout and 13 as the regional scouting director.

There has not been any indication if this purge is related to just the scouting department or also the personnel department which includes:

Ray Farmer has to be considered on the chopping block considering he comes from the Herm Edwards era who ran a completely different system than Pioli.

The Pro Football Weekly report does say that many of those axed in the Chiefs scouting department had to of figured it was coming.  Now Scott Pioli can bring in the guys that know what he wants.