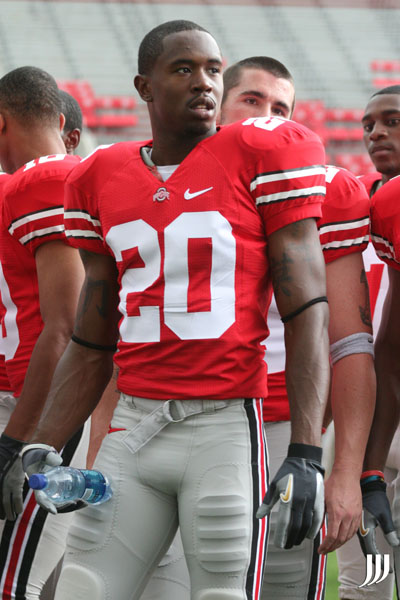 With the first two selections in the 2009 NFL Draft, the Kansas City Chiefs selected LSU DE Tyson Jackson and Purdue DT Alex Magee.  Both are considered, by all accounts, to be "high character" guys (Still trying to figure out if you get a high character rating by simply going to Church.)

The Chiefs fourth round pick was Donald Washington, defensive back out of Ohio State.  This selection raised a few eye brows because of not only the position but also the person.

Is defensive back really a fourth round priority?

Head coach Todd Haley said the Chiefs thought about trading back up into the third round to snag him so this tells us that this is one of those instances where they took the best player available.  The Chiefs liked him and were "excited" that he fell into their lap.

NFL Draft Scout had a third round grade on him.

I don't necessarily think this is an indictment on our current secondary but more that you can't have too many good players at one position.

Maybe I'm different than you all but a reported "team rules violation" doesn't matter to me one bit.  Haley was asked about some reported character issues regarding Washington and responded:

"We really feel like we did our homework on Donald," Haley said. "We have very good relationships with the Ohio State staff from the head coach on down to the position coaches and coordinators. We did a lot of work with them."

Washington came to Kansas City and spent a day and a half here with the staff so if he has major character concerns then he was able to hide it from the coaches. Washington's former high school coach, Lance Scheib, was adamant that he was "just being a kid" and that the rules violation is not an indication of him as a person.

Washington is only a junior and left Ohio State with a year of eligibility remaining.  It's possible he thought his stock would drop with Malcolm Jenkins also leaving the secondary (14th pick overall) or that he just felt he was ready to go now.

His Combine numbers were impressive, particularly his leaping abilities: