The Kansas City Chiefs have selected Mr. Irrelevant, the final player in the 2009 NFL Draft.

Wow! Mr. Irrelevant is becoming a big deal. He'll be going to Newport Beach, California for some sort of party/media appearance as Mr. Irrelevant.

The Chiefs were in attendance at Succop's Pro Day at the University of South Carolina. For the third time in this draft, our Chiefs Draft Interest page hit.

Succop started for South Carolina for three years. His field goal accuracy is below:

NFL Draft Scout had him rated as the 7th kicker. He's also worked as a punter but I can't imagine a scenario in which Dustin Colquitt isn't our punter.

This means the Chiefs currently have four kickers competing. In addition to Succop and Connor Barth, the Chiefs signed two free agent kickers. K Robbie DeHaze of Northern Atlantic was also brought in for a workout. 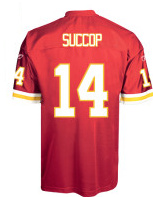 We'll have a full post about the draft coming soon, as well as undrafted free agent news.