Share All sharing options for: Chiefs Select DT Alex Magee From Purdue with Third Round Pick 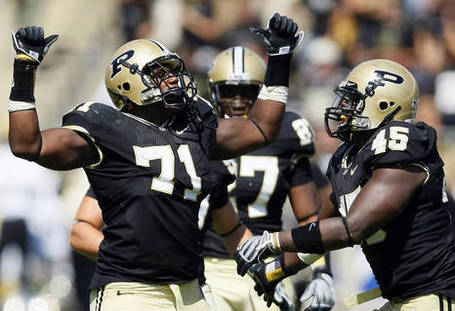 The Kansas City Chiefs have dipped into the Big Ten to find another piece of the puzzle on the defensive line. Alex Magee, defensive tackle out of Purdue, was the 67th player taken in the 2009 NFL Draft.

Mel Kiper called him the "best defensive player at Purdue in the last two years." He's projected by many to be a defensive end in a 3-4 defensive scheme. I'm not sure about the player, but I understand why the Chiefs snagged a defensive end.

Taking a look at the Chiefs recent offseason program, all the defensive ends in the Herm Edwards era (Tamba Hali, Turk McBride, Brian Johnston) were practicing with the linebackers.

Here's what Mocking the Draft has to say on Magee, who they projected as a round four pick:

Strengths: At Purdue, Magee played both end and tackle and would be an ideal tackle in a pressure scheme. He uses his quickness at tackle to beat linemen off the snap and get good positioning. Moves laterally really well and has the body control to change direction without losing speed. Long-limbed and has a frame to carry more weight. Team player who switched positions as a senior.

Weaknesses: To make it in the pros, Magee needs to add a lot more power to his frame. Otherwise, when he misses a beat off the snap he can be pushed around. Will sometimes allow blockers into his chest. Gets completely immobilized by double teams. Inconsistent effort and will go long stretches without making an impact.

So we've got our two defensive ends in round one and round three. Tank Tyler will reportedly play nose tackle. Where is Glenn Dorsey going to play?

Round 2, #34 Traded to New England for QB Matt Cassel and LB Mike Vrabel