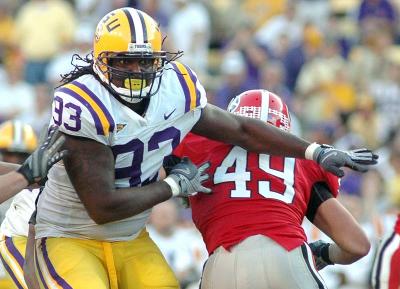 If I told you two weeks ago that the Kansas City Chiefs might be selecting Tyson Jackson, a defensive end out of LSU, you probably would've told me I was crazy.  But then a report from Michael Lombardi of the National Football Post came out (hey, he was right about the Tony Gonzalez trade calling it an "80-85%" chance of happening) and said the chatter around the league is that the Chiefs are "in love" with Jackson.

Now, you go look at mock drafts here, here, here, and here to see Jackson flying up the draft boards.  The most popular pick for him prior to the Combine was in the mid-teens, usually to the San Diego Chargers at the 16th pick (as we did in the AP Community Mock Draft).

Now?  Jackson is becoming as popular a pick as Aaron Curry. Is this based on the performance of the actual player or is everyone being trendy?

Jackson is being talked up by the folks at ESPN who may or may not be relying on actual sources (instead of opining like the rest of us).  Lombardi sees him headed to Kansas City.  Mike Mayock of the NFL Network doesn't see him getting past the Packers.

It would be right in line with GM Scott Pioli's last first round pick - Jerod Mayo, who many didn't think would be picked that high.

The truth is that the amount of information coming out of Arrowhead is minute at best and non-existent at worse.  The signs are there for being Jackson the pick:

But until Roger Goodell says 'And the Kansas City Chiefs select...', we still really have no idea.  It could be one of four or five different players which is vastly different from the Chiefs' 5th pick last season.  When Glenn Dorsey fell, it was a no-brainer pick for the Chiefs front office.  This year is much different.