Tony Gonzalez: 'I'm going to retire as a Chief'

Share All sharing options for: Tony Gonzalez: 'I'm going to retire as a Chief' 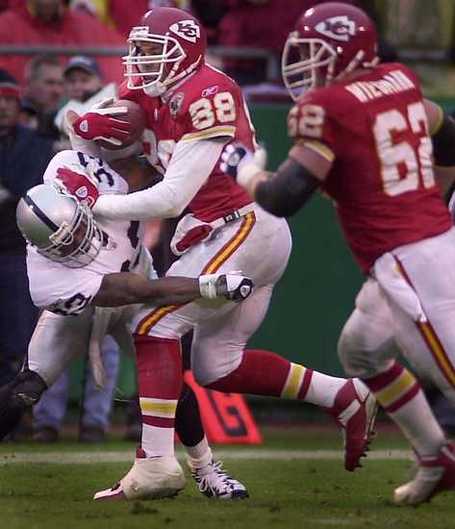 Former Kansas City Chiefs tight end Tony Gonzalez spoke with the Associated Press and said Kansas City will always be a part of his life.  He also said that when it comes time to enter the Hall of Fame (an inevitability), he'll do so in Chief red.

"When I retire, I’m going to retire a Chief. It’s been a beautiful, beautiful ride in Kansas City. I’m not selling my home there."

Speaking to Chiefs' fans across the country who responded somewhat negatively to the trade that sent him to the Atlanta Falcons, Gonzalez said Kansas City will always be home.

"Kansas City will always be a big part of my life," he said. "At the same time, I don’t know how many years I have left to play. Now I’m looking forward to making a Super Bowl run in Atlanta."

Gonzalez had one last note for those who have supported him for the last 13 years:

"I hope the fans in Kansas City will understand."

Whew...the Chiefs will have one more player in the Hall of Fame.