Share All sharing options for: Morning Update (Moving On Edition) 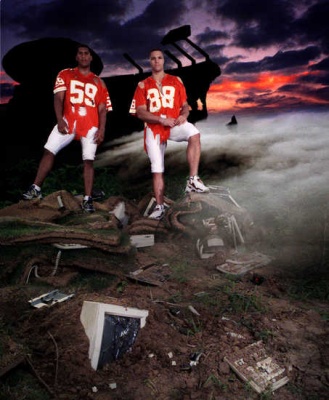 Donnie Edwards and Tony Gonzalez...end of an era (via media.kansascity.com)

Throughout the day, check the FanShot section for more links.

We are one day away from the NFL Draft Chiefs fans. I'm so excited I'm about to call in to work to tell them I won't be in. Well, not that excited but you know what I'm saying.

Today, we'll finish up the final four picks of the Arrowhead Pride Community Mock Draft. I've gotten all but the final pick in for the Steelers so we should be ready to pump these out.

We've got a slight bug in our Friday blogging plans. I'm headed to Lafayette, LA, this afternoon and will be in the car for at least 6 hours (Yes, I realize how terrible this decision to go to Miss Arrowhead Pride's cousin's wedding. Yes, it's that far removed from me. I can't believe I agreed to this without thinking about the Draft.)

But...Primetime will be around today and this afternoon and I will be back later tonight. Tomorrow morning, we're starting bright and early around here.

It's the Draft baby! Get excited!