Chiefs Allowed Tony Gonzalez and Agent to Shop for a Trade

Share All sharing options for: Chiefs Allowed Tony Gonzalez and Agent to Shop for a Trade 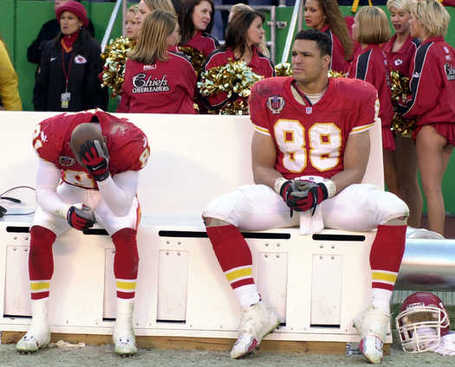 Former Chief Tony Gonzalez with Kevin Lockett after an OT loss to the Raiders.

In the days leading up to the trade that shook Kansas City, Tony Gonzalez and his agent Tom Condon narrowed their choices to three teams according to Jason Whitlock (H/T ChiefDJ in the FanShots).

Condon preferred the Giants and the Falcons primarily because he represents their quarterbacks, Eli Manning and Matt Ryan. It was thought that a high third-round pick might entice Pioli on draft day.

If that's the way it went down, then the Chiefs had placed a high third round pick as Gonzalez's value.  The Falcons offered a late second round pick two days before the draft began.  The Chiefs had to hop on it.

So, the notion that Gonzalez demanded a trade from the Chiefs isn't true.  The Chiefs didn't seek a trade.  They said, 'Sure, see what you can get us out there.'  And Scott Pioli wouldn't be doing his job if he didn't take a look.

One of Bill Belichick's best traits is not only the ability to accurately judge talent for his team, but knowing what everyone else around him is going to do.  It allows him to place an accurate value on a player.  We hope Pioli took enough lessons from Belichick on this one and received an offer that was greater than what he perceived to be Gonzalez's value.

It's funny we talk about placing a value on a player and Tony Gonzalez in the same breath.  I've said his value would have dropped significantly from last October's trade deadline.  But I was wrong.  And so was Tony - this is what he had to say following the trade deadline in 2008:

When you look at it in that context, this trade doesn't seem so bad (our current approval poll is 59% disapprove).