Share All sharing options for: Tony Gonzalez Wants to Play with Falcons for 'three or four years' 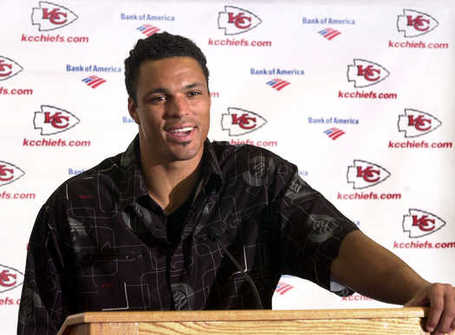 Tony Gonzalez is all smiles after signing a 7 year deal with the Chiefs in 2002.

Tony Gonzalez spoke with Jay Glazer of FOXSports.com following the news that the Pro Bowl tight end had been traded by the Chiefs.  He cited the Falcons young talent as motivating factors for the trade.

"It's somewhat bittersweet," Gonzalez told FOXSports.com exclusively. "I love Kansas City. I grew up in Kansas City. The city means a lot to me. I got there when I turned 21. It will be sad to leave a city I love. But I'm looking forward to making a Super Bowl run in Atlanta every year for the next three or four years.

"With Matt Ryan, Michael Turner, Roddy White and now myself, we have the chance to be in the top 5 in the league in offense every year. How could I not be excited to join that team?

Gonzalez said neither side was angry about the situation and he's leaving Kansas City on a good note.

"(Chiefs GM) Scott (Pioli) and (head coach) Todd (Haley) told me a little bit ago and there were nothing but positives," Gonzalez continued. "I think this is something that will help them because they are rebuilding. There was no bitterness at all from either side."

Gonzalez couldn't get a trade last October from the Chiefs former GM Carl Peterson.  But Scott Pioli granted him that wish.  If it had been known last October that Gonzalez wanted to play  for "three or four years", maybe the Chiefs could have gotten a higher offer in trade offers.  Reports at the time said Gonzalez wouldn't commit to more than two years.