Share All sharing options for: Chiefs Trade Tony Gonzalez to the Falcons 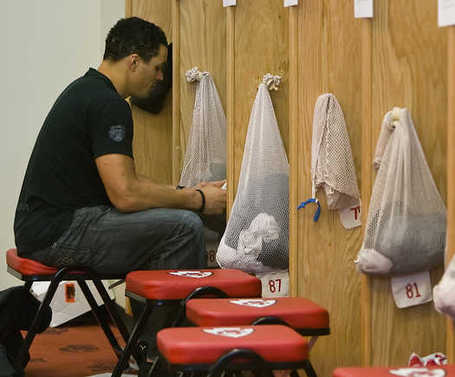 Following the 2008 season finale against the Bengals, this is one of the last times we saw Tony Gonzalez in the Chiefs' locker room.

Jay Glazer has the story:

The Chiefs have agreed to trade the perennial Pro Bowl tight end to the Atlanta Falcons for a second-round pick in the 2010 draft, FOXSports.com has learned.

Gonzalez has already spoken to both the Chiefs and Falcons about the deal, according to sources.

A second round pick NEXT year.  Updates to follow....

On March 23rd, Chiefs owner Clark Hunt said the Chiefs had decided to hold onto Gonzalez.

"On behalf of my family and the Chiefs, I want to thank Tony for his time in Kansas City," Chiefs Chairman Clark Hunt said. "Over the last 12 seasons, Tony has been one of the finest players in Chiefs history, and he will always be remembered as a member of the Chiefs. His play on the field speaks for itself – he holds almost every major NFL record for tight ends, and he is arguably the best to ever play his position. We wish him the best in Atlanta."

"From an organizational as well as personal standpoint there are mixed emotions. I have the highest personal and professional respect for Tony and consider him to be a future Pro Football Hall of Famer."

Visit The Falcoholic to see what the Falcons are saying.