Share All sharing options for: Examining the Chiefs' Draft Interests by Conference 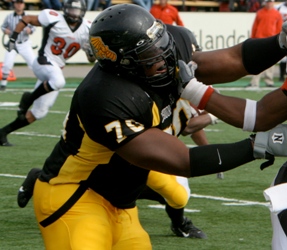 As draft day nears, we'll be mining this draft interest page we've been compiling for all it's worth. We've already talked about which players the Chiefs are interested in that they may trade down for, the first round candidates they've looked at and we've sorted the prospects by position.

Today, we break down the prospects by conference, since yesterday I heard this UT nut on the local Austin, TX, sports radio station railing against pretty much every other school's NFL players besides Texas'. I was fidgeting out of annoyance in the car on the ride home listening to that because of Primetime's post saying the Chiefs shouldn't mess with Texas in the NFL draft. Take a look at that list and tell me Texas doesn't have its big share of NFL first round busts. I mean, this radio host was calling LenDale White a bust but not Vince Young. Sheesh...I guess that's why I don't listen to this stuff.

Anyway, thanks for letting me ramble. Here is how the list of draft interests breaks down by conference:

I just blew you away, didn't I? Imagine that. The Kansas City Chiefs are "favoring" the Big 12, SEC and ACC.  A majority of NFL players come from those conferences so we're not really breaking any new ground with this. Also keep in mind that the Chiefs hold a local Pro Day for area prospects, which bumped up the Big 12 total by a few.

The Chiefs have checked out, as far as we know, six players from non Division 1-A football conferences. If you recall, the Chiefs had actually two D-II corners starting for a period last year in Brandon Carr and Maurice Leggett. It's no surprise that Pioli and Haley are checking out smaller school prospects as well.

For perspective, here is how the NFL Draft has panned out by conference since 1990:

I also wanted to take a second to pump up our site for draft day. It should be a lot of fun around here. We'll be simultaneously tracking the Arrowhead Pride Mock Draft picks with the real picks, as well as delivering all of the info we can on the Chiefs' draft picks.

Click here to check out last year's draft day coverage. It was a blast.