Chiefs' Pioli Looking to Mizzou for the Next Matt Cassel?

Share All sharing options for: Chiefs' Pioli Looking to Mizzou for the Next Matt Cassel? 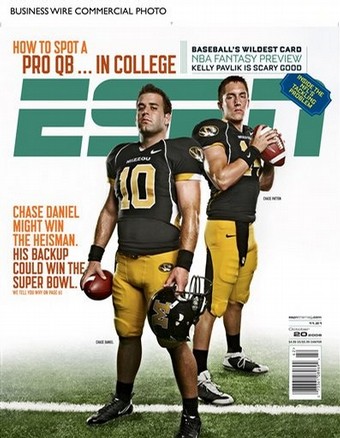 Interesting FanShot from tomahawk44 tonight.  The Columbia Daily Tribune is reporting that former Mizzou backup quarterback Chase Patton has been contacted by the Kansas City Chiefs.

According to the Tribune, the Chiefs were looking for a contact number for Patton on draft weekend.  The Chiefs have the final pick in the 2009 NFL Draft.  They also figure to be players for Chase Patton if they choose to pursue him in the undrafted free agent market.

Like Matt Cassel, Patton has been a career backup.

Of course they each played behind outstanding college quarterbacks in Carson Palmer and Matt Leinart (USC) and Chase Daniel (MU).

There was an ESPN the Magazine piece done on Patton recently.  Scouts said the quarterback position is so difficult to draft (citing Tom Brady) that they have to check out everyone, especially the ones with the size.

"You simply have to take a hard look at a guy who has those types of measurables at a big school," says one. "Because there's no set way to find a quarterback."

What do you think of Chase Patton as a "project' draft pick?