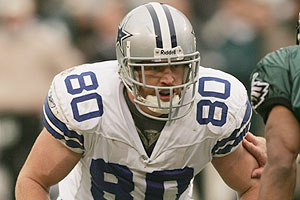 The Kansas City Chiefs have waived offensive tackle Andrew Carnahan, linebacker Curtis Gatewood and wide receiver/kick returner Kevin Robinson. Because all three players have less than four years of NFL service, they will have to pass through waivers before they become unrestricted free agents.

Ryan was in for a workout last weekend.  He's a 6'5" tight end originally drafted in the 5th round by the Dallas Cowboys (Haley Connection) in 2004.  He played two years with the Cowboys, then two more with the Jets.

Releasing Carnahan, a tackle, and Gatewood, a linebacker, isn't all that surprising. Carnahan was brought on back on October 29th of last year and Gatewood added just a couple weeks later on November 19th.

The Chiefs continue to take swipes at Herm Edwards' last draft class with the Chiefs as Kevin Robinson is a former 6th round selection in 2008.  He was inactive for half the season but came back to dress for eight games.  He returned punts 11 times for a total of 94 yards and caught no passes.

H/T 810 Sports radio and RedNose in the comments.