Share All sharing options for: Herm Says the Chiefs Should Draft Aaron Curry 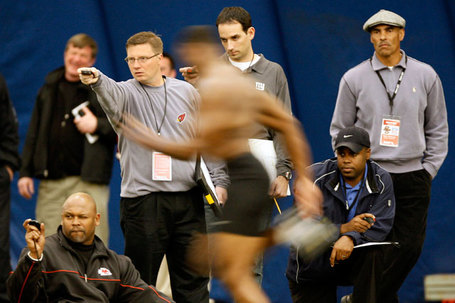 On January 22nd Herm Edwards' assessment of the Kansas City Chiefs would have mattered. But today, Herm's opinion that the Chiefs should draft Aaron Curry doesn't actually matter.

When asked about the Chiefs' plans, Herm cited Brian Orakpo and Eugene Monroe as possibilities, but ultimately said "the linebacker" should be the choice (H/T Adam Teicher at the Red Zone):

"The linebacker is a good pick for them," Edwards said. "An offensive lineman is a good pick for them, the kid from Virginia (Eugene Monroe). The kid from Texas (Brian Orakpo) is kind of a unique guy, too. But if the linebacker is sitting there, he a good player now. He comes in and plays. He’s going to play right away. He’s a heck of a football player."

Saying "the linebacker" brings back some memories...I won't tell you what kind of memories, but let's just say memories.

I just got off the phone with Jon Gruden and Steve Mariucci.  I'm getting something together now and will let you know what they said about the Chiefs and the draft.