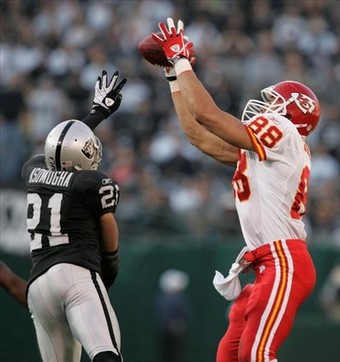 This week may very well be our last week with Tony Gonzalez as a Chief.  We all are acutely aware of Tony's multiple All-Time TE records, and I have become increasingly irritated by the media always qualifying his accomplishments by preceding everything with "Tight End."  For, against, or indifferent to Tony's possible departure, we need to truly appreciate just what Tony has been so far...

Before I start listing the extended stats, you can read this next player's stats and feel satisfied if you don't read any further.

Tony has more receptions and more touchdowns than Torry Holt.  Yes, Tony was drafted 2 years before Holt, but Tony is still regarded as the best TE in the NFL, whereas Holt is widely accepted as past his prime.

However, even that comparison is pedestrian when looking at the All-Time NFL Leader Rankings.

Let's look at receptions.  Tony has 916 at present.

That would place Tony Gonzalez as the 3rd 2nd All-Time NFL Leader in Receptions (assuming Harrison doesn't play again, and Bruce & Owens retire after this year)...Here's the extended current rankings courtesy of walterfootball.com, really look at the names on this list:

How about Tony's touchdowns?

He currently has 76 TD's and is tied for 22nd on the All-Time NFL Receiving TD's list.  He has averaged 6 TD's per year for his career.  If he catches his 6 TD average for the next 2 years, he will have 88 TD's...which will tie him for 10th All-Time.

He has averaged 912 yds per year for his career.  Using the same methodology as earlier, Tony would have 12,764 yds for his career if he maintains his average for the next 2 years...placing him at 12th on the All-Time Yards Receiving list.

He would be 9th All-Time in Yards Receiving (Yes, Moss is going to alter this projection).

How about one last stat?

Most Seasons with 50 or more Pass Receptions:

Tony is currently tied for 3rd All-Time with 11.  As stated earlier, he has averaged 76 receptions per year.  If he plays for 2 more years, he will be tied for 2nd All-Time.

If Tony has a 3rd year of 50 receptions, he will be alone in 2nd place All-Time. 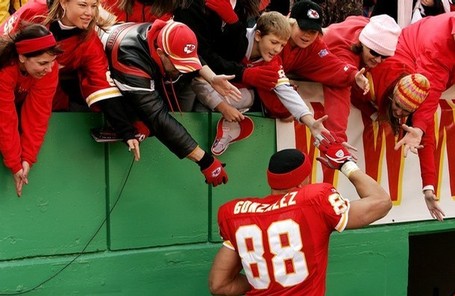