Broncos Trade Cutler to the Bears

Share All sharing options for: Broncos Trade Cutler to the Bears 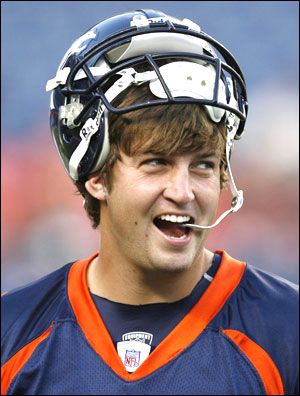 Jay Cutler is out of the AFC West and into the NFC North.

The Denver Broncos have agreed in principle to trade quarterback Jay Cutler to the Chicago Bears. Terms of the deal will be disclosed at a later time.

Cutler has been traded to the Chicago Bears for two first-round picks and Kyle Orton, FOXSports.com has learned. It is also believed that mid-round picks were swapped as part of the deal.

The Broncos now have the 12th and 18th picks in the 1st round of the draft.

Shocking but a perfect scenario for the Kansas City Chiefs.

The rumors were flying that a deal with the Washington Redskins was "imminent."

See ya around, Jay. Check out Mile High Report for more.