Share All sharing options for: Outcome of Larry Johnson Grievance Hearing Should be Known Within a Week 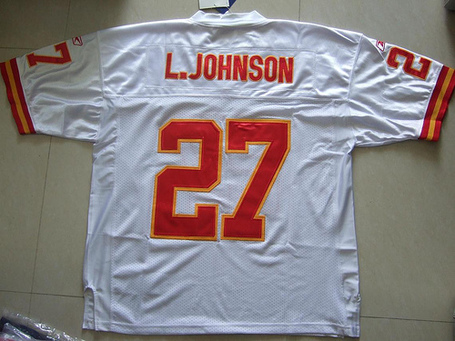 Just a quick update in the slow, painful extraction of Larry Johnson from Kansas City.

The NFL Players Association has presented its case contesting whether teams can withhold guaranteed salaries and bonus money from embattled players Plaxico Burress and Larry Johnson.

Union lawyer Richard Berthelsen said Thursday that the NFLPA made its arguments during a 3½-hour hearing before Stephen Burbank at the University of Pennsylvania on Wednesday, as did NFL attorneys. Burbank's ruling is expected within a week, Berthelsen said.

I was talking with Primetime earlier and I was telling him that I'm pretty much convinced that there is no way that Larry Johnson will be a Kansas City Chief this upcoming season. It makes too much sense- make sure the contract situation is settled before they cut him so they can recover as much money as possible.  If the Chiefs had cut him without pursuing a grievance, Larry would get the money all of that guaranteed money in his contract. I also get the feeling like there weren't many trade suitors for Larry.

For those interested, Stephen Burbank is the NFL's special master that we were talking about. Basically, he's an insanely smart dude who a federal court assigned to settle disputes between the NFLPA and other NFL related entities. Back in 2007, Burbank made the final ruling in the Michael Vick case that allowed the Atlanta Falcons to recoup a bunch of Vick's salary.

I'm pretty tired of talking about Larry Johnson. We'll get back to this within the week apparently.