Chiefs are Glad Cutler is Leaving the AFC West

Share All sharing options for: Chiefs are Glad Cutler is Leaving the AFC West 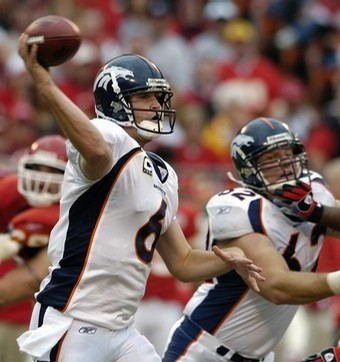 The Kansas City Chiefs should be happy that Denver Broncos owner Pat Bowlen has decided to trade Jay Cutler.  With news that the Washington Redskins are "actively pursuing Cutler", it's becoming a foregone conclusion that Cutler won't tack many more games onto his .750 career winning percentage against the Chiefs.

We can debate about Jay Cutler all day but you can't deny the statistics which clearly shows his very successful career against the Chiefs.

In years two and three, Cutler was able to win three of four games against the Chiefs.  Usually a 25 year old Pro Bowl quarterback doesn't get worse in the next three years.

Looking at the quarterbacks that have been rumored to possibly be involved in a deal for Jay Cutler (Kellen Clemens, Jeff Garcia, Daunte Culpepper, Chris Simms, Draft Pick), there's not a chance the Chiefs will be facing a quarterback better than Cutler in 2009.

There's an argument that acquiring two first round picks in a trade would somehow be equal value for him.  I can see that case but the Broncos would be facing a 50% bust rate at first round quarterbacks if they chose that route.  Plus, there aren't any two positions on a football field that can match the impact and value of the quarterback position.

I'll take my chances that the next guy won't be nearly the player Cutler is.