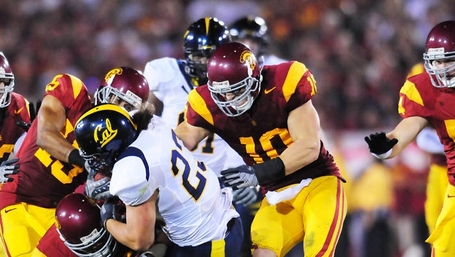 Kansas City Chiefs representatives made the trek to the west coast yesterday for the USC Pro Day.  Multiple prospects that may interest the Chiefs participated including linebackers Rey Maualuga, Brian Cushing and Clay Matthews.

30 of the 32 NFL teams attended the session with the Broncos being one of the teams that didn't show up, which is interesting considering the rumors that were flying that their interest in Mark Sanchez was rising.

Brian Cushing (4.68 40 yard dash) - Quick and explosive during drills but showed some tightness in his hips that didn't squash any concerns that he may not be a complete three down linebacker in the NFL.

Clay Matthews (4.57 40 yard dash) - Obviously better than Cushing when dropping into coverage and solidified his position has a mid-to-late first round pick.

Rey Maualuga (4.7 40 yard dash) - A good showing considering his 40 was slow (4.83) at the Combine.  But scouts continue to say it's not the workouts that matter with a MLB with his size, it's the tape.  He should be the top USC linebacker off the board.

Mark Sanchez - By all accounts had an excellent Pro Day, some say even better than Matthew Stafford. He doesn't have the arm Stafford does but displayed plenty of accuracy with approximately 80 passes (a lot for a Pro Day, Stafford threw 50).

Maualuga is a legitimate prospect for the Chiefs at the third pick in the draft. His stock has dropped a little since he's not a "workout guy" but more of a "tape guy".  Still, I would be happy with him at the third slot if our top choice (Smith/Monroe/Curry) is gone.

Cushing and Matthews are projected to be selected in the mid-to-late first round so any interest the Chiefs have would likely involve a trade down (or a trade up).

Sanchez doesn't appear to be in the running for the top spot in the Draft.

The USC Pro Day, like the Georgia Pro Day was apparently a media circus.  It's been regarded as one of the top workouts in the country for the last few years.