Share All sharing options for: Chiefs 'in love' with LSU's Tyson Jackson? 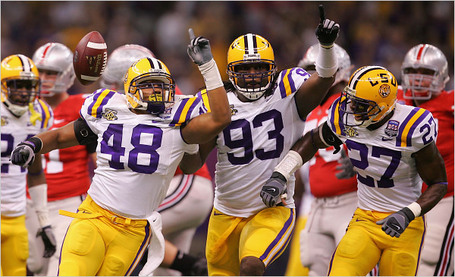 Michael Lombardi of the National Football Post says the scuttlebutt around league circles is that the Kansas City Chiefs are viewing LSU's Tyson Jackson very favorably.  Projected, as the first defensive lineman off the board by some, Jackson's size (6'4", 296 pounds) and experience (three year starter at LSU) make him one of the safest picks.

The word around the league is the Chiefs are in love with DE Tyson Jackson of LSU and see him as another Richard Seymour type.  Teams are worried (as I am) about Curry being just a Sam Backer and not an effective blitzer.

We've gone over the Curry argument time and time again so let's focus on Jackson for the time being.  We've heard and witnessed that Scott Pioli likes to build from the inside out.  Address the offensive and defensive line then plug in the rest of the pieces.

Rob Rang of NFL Draft Scout, who has Jackson as the #1 defensive end, says Jackson, not Curry, is the safest pick in the 2009 NFL Draft:

Jackson is not the traditional pass-rushing threat teams are looking for at defensive end, but don't expect that to keep him from ultimately being the first defensive lineman drafted.  Jackson is one of the few defensive lineman in the 2009 class to have the size and strength necessary to play outside in the 3-4 scheme and could even be moved inside to defensive tackle in the 4-3 alignment.  The position versatility and Jackson's three steady years as a starter for the Tigers make him, in one scouting director's estimate, "probably the safest defensive lineman of this draft."

Before you all scoff that defensive end in a 3-4 set isn't a premium position, let's step back in history to look at what Scott Pioli did with the highest draft pick he's ever had.  In 2001, while with the Patriots, Pioli and Bill Belichick used the sixth overall pick on Richard Seymour - a 3-4 defensive end.

Seymour of course has gone on to five Pro Bowls and three 1st team All-Pro selections.  "Worthy" of the sixth overall pick any day of the week.

We are unclear on where the Chiefs want to draft him though. Reports indicate that he could still be available when the Denver Broncos step to the podium with the 12th pick.  Plenty of mock drafts and league insiders speculate that he'll be in Denver if he makes it that far.

If the Chiefs are as "in love" with him as Lombardi states, finding a way to make him a Chief will be a double whammy if we can also keep him away from a division rival.

It's not a sexy pick, like Aaron Curry or another outside linebacker, but it's a necessary pick.

Here are a few places he's been talked about:

WesternChief wonders if he'll be the Chiefs pick