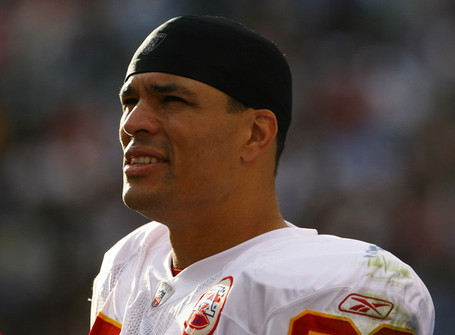 Tony Gonzalez did not attend the Kansas City Chiefs voluntary mini-camp that started on Friday and concludes today.  But he did attend a practice.  Just not in Kansas City.

Embree is Gonzalez's former position coach with the Chiefs and Gonzalez lives near the UCLA campus.

Gretz lays it out nicely for us:

Does he need to be part of this mini-camp to make himself a better player? No. Did the team need him in the house to make the Chiefs a better team? Absolutely.

Same with Brian Waters. They're both Pro Bowlers and the minicamp wouldn't do much as far as honing their craft goes. But this is a new regime.  The coach and multiple position coaches are all new, so he should have been there.

Both Waters' and Gonzalez have new position coaches that they likely haven't even met yet.

As Gretz points out, just because they're Pro Bowlers doesn't mean they can ignore the fact that neither has won a playoff game in their career and they were both part of a squad that's won two of their last 26 games.