Are the Chiefs Set at Center?

Share All sharing options for: Are the Chiefs Set at Center? 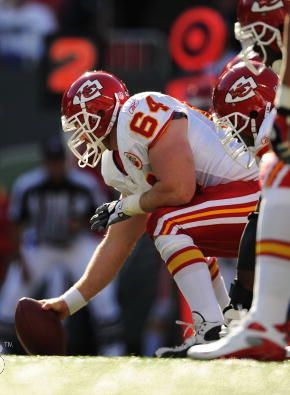 The Kansas City Chiefs continued their voluntary offseason program today. The drills performed today are all non-contact but that doesn't matter for our purposes here.

Today, we're talking Chiefs' offensive line, specifically the center position. Much has been made about a couple of the elite center prospects available in this draft, namely Alex Mack and Max Unger (Here's a link to some other centers entering the draft) but it's beginning to appear the Chiefs might already be set at center. At least for 2009.

Rudy Niswanger started fifteen games for the Chiefs last season at center. Things didn't change in today's morning practice when he lined up at center again. Here was how the line shaped up today (H/T Bob Gretz):

Niswanger has a history of playing guard as well but with Brian Waters out of the mix today the Chiefs replaced him with Smith, not Niswanger.

Niswanger offered a second round tender

Entering his fourth year, Niswanger was offered a second round tender by the Chiefs since he's a restricted free agent. This basically means that teams can make Niswanger an offer that the Chiefs can either match or let him go with second round compensation.

This tells me that the Chiefs like what they see in Niswanger. They chose to keep him. Why would they do that unless they had some plans for him?

Judging by our draft interests page, the Chiefs aren't spending much time looking at centers. They scouted Lawrence Lovell, a small school offensive lineman out of Stony Brook University. He played left tackle in college but projects as a guard or center in the pros.

Even if Lovell were selected to be the Chiefs center, how likely is it that he would be the starter on day one? Not very if you ask me.

By 'Pioli guy' I mean big and smart. He's 6'5" and over 300 pounds so he's certainly got the size to develop into a decent center. In addition to that, he's got the smart part down as he was going to enter medical school if he hadn't been picked up by the Chiefs and apparently "doesn't forget anything he sees, hears or does."

When you line these factors up, it wouldn't surprise me one bit if the Chiefs entered the 2009 season with Rudy Niswanger as the starting center. I don't know enough about the technical aspects of the center position to break down his play in 2008, but I've heard more than a few critiques of him from folks on AP.

No matter how you feel about Niswanger as the Chiefs' center, it appears the stars are aligning so that he'll be the starter in '09.