No Talks Between Chiefs, Panthers on Julius Peppers

Share All sharing options for: No Talks Between Chiefs, Panthers on Julius Peppers 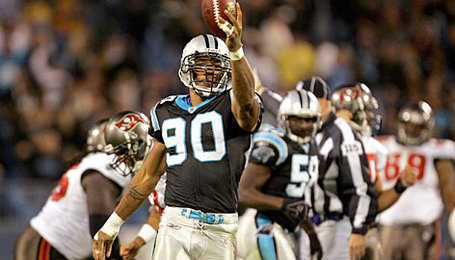 In an interview with WEEI last week, NFL Network reporter Adam Schefter said he wouldn't be surprised if the Kansas City Chiefs made a run at Carolina Panthers defensive end Julius Peppers on draft day.

That may be true (although we stress that it was just speculation on Schefter's part at the time), but so far no talks have occurred between the Chiefs and Panthers regarding the status of Peppers.

The Panthers slapped the franchise tag on Peppers but he has yet to sign.  That means only his agent, Carl Carey, can negotiate with other teams on trade scenarios.

Panthers GM Marty Hurney said Carey has not approached him with any trade offers.

The Panthers gave up their first round pick in the draft day trade that landed them right tackle Jeff Otah last year.  The lack of a first rounder is one of the driving forces behind the speculation and rumors that Peppers might be moved.

I n addition to that, the defensive end has said he wants to be an outside linebacker in a 3-4 scheme and is reportedly only interested in playing for four teams that run the 3-4 - three in the NFC and one in the AFC (widely believed to be the Patriots).

Since the Chiefs aren't on his list, that doesn't mean he can't be traded - as Scott Pioli said in yesterday's press conference, "It's not up to the players."

The biggest impediment behind such a deal getting done is that not only would the Chiefs have to give up likely a first rounder for him (leaving them with no selections on the first day) but also sign him to a long term deal that will likely be the highest ever for a defensive player.