Count it Down: Eight Days Until the Chiefs Start Drafting

Share All sharing options for: Count it Down: Eight Days Until the Chiefs Start Drafting 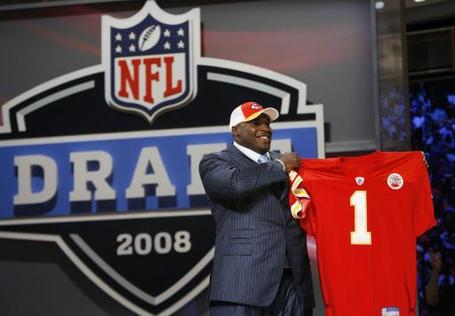 Maybe it's because I feel like I'm perpetually stuck in the haze that is February and March of the NFL off season but I can't believe that the NFL Draft is just over one week away. It seems like the last three months or so have flown by compared to previous off seasons blogging at Arrowhead Pride. I had to make up fewer ridiculous regular features to pass the time. Here's a quick overview of the NFL draft this year so you can plan your weekend.

The NFL Draft start time at 3 PM CST on April 25th.Teams will have ten minutes to pick in the first round; seven minutes in the second; and five minutes for each round three through seven. The term "first day pick" now only refers to the first two rounds of the draft.

That means that by 3:30 PM on April 25th, the Chiefs will be done drafting for the day. Unless of course we trade back and snag a second round pick.

The first day of the NFL draft is no longer a marathon, day long event. Those time reductions have greatly reduced the amount of time it takes to get through the draft. Check it out.

So, if you're planning your Saturday evening around the draft (and you better be), you can expect to be done watching the going ons in New York probably around 7 PM CST or so.

As far as what is going to be happening here at AP, we'll have full coverage of course. Last year, we had thousands of visitors and over one thousand comment over the draft weekend.

This year, I expect thousands of comments and tens of thousands of visitors. If you remember last year's draft, the site hung a bit when we got to over 400 comments on a thread. That will not be the issue this year. The auto-refresh comments will be in full force, making draft day here at AP basically a big chat room.

You won't be able to sleep in on Sunday. The draft begins on Sunday at 9 AM CST and goes to 5 PM CST.

Understandably, the second day of the draft is a lot less hectic than the first. Still, we'll of course be here giving you live commentary and coverage of, well, everything we possibly can.

Since it is Friday and I woke up a touch late, let's start this morning's conversation by seeing what everyone is doing for the NFL Draft. Will you be at home? At a bar? Stuck to your computer? At the draft?

Me? I realized only two weeks ago that I had agreed to go to a wedding in Lafayette, LA, for Miss AP's cousin on draft weekend. How did I drop the ball on this? I have no freakin' clue. I made it clear though that I need to be by a computer for the Chiefs' picks at the very least. We'll see how it works out. Those who are married/practically married, what do you think my chances of avoiding a big argument are? 5%?

Anyway, we'll have more for you throughout the day of course but let's start off by talking about what you'll be doing on draft day.