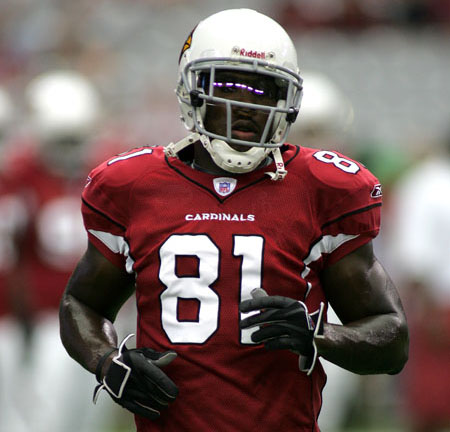 We've received some news via 610 Sports that multiple players on the Kansas City Chiefs are not fans of new coach Todd Haley.  Apparently his former players with the Arizona Cardinals don't feel the same way.

Boldin, who said he just has a player-coach relationship with former Cardinals coordinator Todd Haley, said he wouldn't mind playing for him in Kansas City.

Of course Boldin says this the same day I say there is no chance the Chiefs give up the reported asking price, 1st and 3rd round pick, for the Cardinals receiver.

Boldin also said he wouldn't mind playing in the NFC East either.

I wouldn't read too much into this.  Boldin likely won't be coming here - it takes two to tango and it would be very out of character for GM Scott Pioli to give up the Chiefs' first three picks in the 2009 NFL Draft.

What's intriguing about this is that we have just heard that multiple players in Kansas City reportedly do not like new coach Todd Haley.  610 Sports reports that Will Franklin was a "marked man" by Haley which prompted his request for his release.

Boldin and Haley had an on-camera tiff during the playoffs last year.  Both players came out of the situation saying it was a no big deal.  But that, combined with the reports from 610 Sports that Haley gets in fights with players a lot, makes more than a few people nervous that the new coach is going about business the wrong way in Kansas City.

Not that we needed the Boldin-to-KC rumor mill fodder but it makes for an interesting offseason.