610 Sports: Chiefs' Will Franklin Asked for his Release

Share All sharing options for: 610 Sports: Chiefs' Will Franklin Asked for his Release 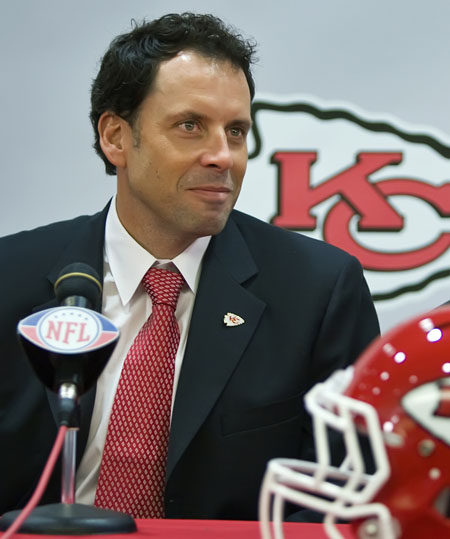 610 Sports is reporting that Kansas City Chiefs head coach Todd Haley conducts quite the offseason conditioning program.  The conditioning was so intense for wide receiver Will Franklin that he actually asked the Chiefs for his release.

Then he went to the Detroit Lions.  That's what you get.

610 Sports says Haley has a reputation for run-ins with players and coaches and that was on full display in the Chiefs voluntary mini-camp March 30th.  Entering only his second season in the NFL, Franklin was pushed so hard in conditioning that he wanted out.

The word is that Franklin walked into a meeting with Haley prior to the offseason conditioning program and told him (via 610 Sports):

"You're a marked man. You're a Herm Edwards guy and I'm gonna ride you hard."

610 Sports called him the "whipping boy" and speculated that Haley's behavior with Franklin was meant to send a message to the players from the Herm Edwards era.

Multiple sources said Haley was "all over Franklin" at which point he decided he couldn't work with Haley.  One prominent NFL coach told the radio station that Haley gets in fights with players a lot.

610 Sports reported that multiple players have said, off the record, that they like GM Scott Pioli but Todd Haley is an "***hole."  The players 610 talked to have said they do not like Haley.

Will Franklin showed up to the voluntary session five pounds overweight.

This answers the questions regarding the Chiefs' decision to part ways with Franklin, whom many of us thought had plenty of potential.

I'm not sure what to make of this.  There's a fine line between pushing players to perform and alienating them.  If these reports are true, and if the quotes from the players are true, then this could be trouble brewing in the Chiefs locker room.

Brian Waters apparently felt alienated when he asked for a trade from the organization after GM Scott Pioli denied a meeting with him (on the night of the start of free agency) and Haley told him "22 guys off the street could have won two games last year."

We've heard the rumors that Haley isn't a players coach in the way that Edwards was.  Looks like some of those rumors are coming to fruition.