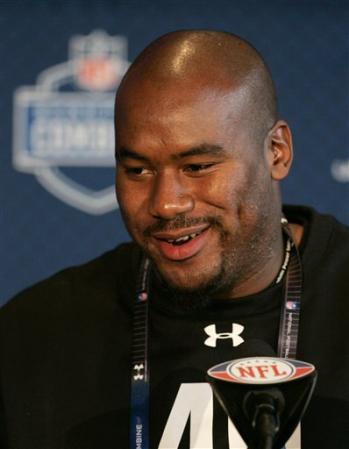 Does Jason Smith hold the key for a Chiefs trade down?

File this in the "Things that make you go hmm..." department.

The Philadelphia Eagles hosted potential top five pick and Baylor offensive tackle Jason Smith today according to Chris Steuber of Scout.com.  As if the trade down speculation wasn't enough around here, this begs the question - how are the Eagles planning on drafting a top five pick?

Steuber says this is a curious move, especially for the Kansas City Chiefs since it's been widely speculated that the second highest rated tackle in the draft won't make it past the third pick.

The Eagles also hosted Virginia offensive tackle Eugene Monroe for a workout a couple weeks ago.

Steuber says the GM Scott Pioli is "dangling" the third overall pick to anybody willing to make an offer.

But there's been plenty of reports out there that this year's draft isn't top heavy like so many in the past which is causing teams to reconsider what they demand in return for one of the top picks.

Why the Eagles hosting Smith is a "curious" move:

We've talked about the trade down possibilities ad nauseum around here but we're beginning to see some legitimacy behind some of the speculation. Last week there were reports out there that the Eagles would be willing to part with one of their first round picks to obtain Cincinnati Bengals receiver Chad Johnson which would have thrown the Chiefs-Eagles trade scenario out the window.

From the outside looking in, it appears the Eagles are practicing some due diligence in the case a scenario that can land them one of the top two tackles presents itself.  And that scenario would likely involve the Kansas City Chiefs.