Trade Demands Put Chiefs Out of the Running for Boldin

Share All sharing options for: Trade Demands Put Chiefs Out of the Running for Boldin 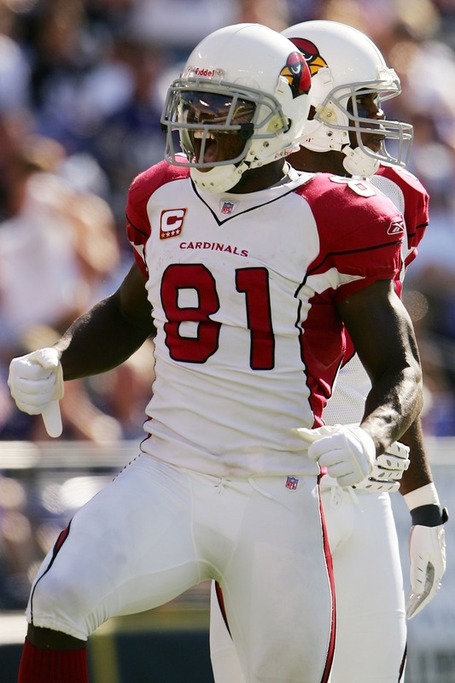 ESPN's Sal Paolantonio is reporting that the Arizona Cardinals are starting the minimum bids for receiver Anquan Boldin at a first and third round pick.  That number is only going to get bigger as more suitors potentially flock to the best receiver that may be on the trading block.

GM Rod Graves and head coach Ken Whisenhunt said yesterday that they're willing to listen to offers Boldin and that they've been listening already.  They reiterated, however, that their stance on Boldin hasn't changed - at last publicly.

For those folks that think the Kansas City Chiefs need another receiver to complement Dwayne Bowe - I hear ya.  I don't think anyone is arguing the valid points that the Chiefs need another threat in the passing game, especially with the future of Tony Gonzalez in a Chiefs uniform up in the air.

But there is no way, no how GM Scott Pioli will give up a first and third round pick for Boldin.  Not gonna happen. Not gonna do it. Not a chance.

Do you really think Pioli would head into April's draft without a pick until the 4th round?  This isn't Phil Savage and the Cleveland Browns here.

So, I understand those who want Boldin.  He's an excellent player and would make a great addition to the Chiefs.  He even represents a need for the Chiefs.  But there is no chance the Chiefs land him at that asking price.

I felt the need to post this because of the Chiefs Connection.  This regime has shown that they tend to lean towards the who you know, not what you know side of the NFL. So, when Boldin reportedly became available, a handful of FanPosts were put up asking if the Chiefs should go after him.

It would be nice but you can't always get what you want.