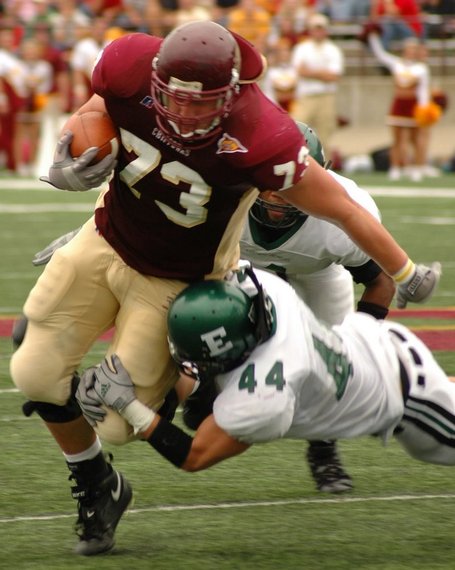 "I'm a gym rat, I love the game. I will give 110% every snap, every play. I'm a guy that is very coachable and can lead on and off the field. I refuse to be a bust because my work ethic is too good and I refuse to quit or settle for mediocrity."   -Daniel Holtzclaw, LB, Eastern Michigan University

We caught up with Daniel Holtzclaw again and he was nice enough to take some time out to answer a few questions as the NFL Draft nears.

What are you hearing as the draft nears?

All the information I am getting is from my agent, strength coach, trainer. I'm pretty sure they all get the same calls just asking the basic information about me. Unfortunately, I haven't received a private workout or visit from any teams.

Not getting any private workouts isn't necessarily a bad thing.  Daniel has a TON of tape at Eastern Michigan so the scouts know what they're getting in him.  As a prospective ILB candidate in a 3-4 scheme, there aren't a lot of questions about what he can and can't do.

Right now I'm focusing on being drafted. Yes, I have prepared for the worse of being undrafted and going as a free agent. If that is the case I'll choose a team that best fits me to make the 53 man roster.

If all 32 teams have a brain fart (which is unlikely) and pass on Holtzclaw, then the Chiefs are as good a team as any, if not better, for him to sign as an undrafted free agent.  The Chiefs linebackers were awful last year and though they've improved this year, getting younger is still a necessity.

Where are you going to be on draft day?

Draft day I'll be at home in Oklahoma with the family.

If you end up as a Chief, you know Arrowhead Pride is buying you your first beer in Kansas City, right?

I'm not much of a drinker, but if I do get picked up by Chiefs I would love to have a drink with all the supporting fans.

His 33 reps at the EMU Pro Day are equal to Jason Smith and B.J. Raji.  In fact, if Daniel were at the Combine he would have been the top performer in the bench press out of ALL the linebackers there.  The next highest was 30.

He said he wasn't happy with his 40 yard dash time (4.82) but to put that into perspective, it's better than Rey Maualuga and James Laurinaitis. And he's stronger than both of them.

Here are a few places Daniel has been featured on Arrowhead Pride:

Holtzclaw says there is nothing to question.

Inside the mind of a NFL draft prospect

Holtzclaw had a "terrific" pro day

Best of luck Daniel and we hope to hear from you and your new NFL team soon.