Share All sharing options for: Adam Schefter Headed to ESPN? 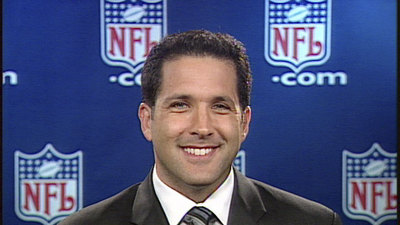 Looks like one of Arrowhead Pride's favorite sports reporters might be headed to ESPN later this year.

Mike Florio of Pro Football Talk is reporting via multiple sources that Schefter, who is under contract with the NFL Network until the middle of August, will make the move to the World Wide Leader later this year.

There had been reports that Schefter was unhappy with his contract at NFL Network and that was the main reason he hadn't been on TV the last month or on NFL.com since March 6th.

Some might ask what this has to do with the Chiefs.  Well, a lot actually.

If you'll recall, in the wake of the Herm Edwards firing, ESPN senior NFL analyst Chris Mortensen started the firestorm that former Denver Broncos coach Mike Shanahan was in discussions with the Kansas City Chiefs about the newly vacant head coaching position.

The "discussions", of course, were non-existent.  None of Mort's "anonymous sources" went on record to defend him and ESPN quickly and quietly shuffled the story under the rug while us Chiefs fans were wondering what the hell just happened.

UCrawford wrote possibly my favorite piece that's ever been on Arrowhead Pride regarding Chris Mortensen and his "sources".  Please read the article. It's excellent.

Shanahan "laughed" at the Chiefs coaching rumors as Schefter's report that he "definitely" won't coach the Chiefs made some of us (me included) look like fools as we slobbered over the possibility of having a two-time Super Bowl winning coach come to Kansas City.

I can't say I'm a fan of this move as Schefter has been outside of ESPN's ring of alleged rumor mongering/page-view generating/page six baloney that we've seen creeping up in the last few years.  He's been one of (along with Jay Glazer of FOXSports.com) most reliable reporters in sports as of late.

As the unchallenged leader of all sports media, ESPN has been able to continue to run amok with a decline in the quality of legitimate sports reporting and an increase the "Who's Now"-esque reporting.  That's not to say there aren't reporters at ESPN that do an excellent job (John Clayton for one), but to have unchecked power in the sports world only hurts us - the fans.

Some folks may not be interested in this story but you should be because how we get our information on the team we love is very, very important.  Plus, us bloggers gotta be able to trust someone, right?