Share All sharing options for: First Month of 2009 Season is Murderers' Row for the Chiefs Offense

The Kansas City Chiefs' offense has already incurred the greatest of changes - a new quarterback. But with question marks surrounding the futures of the best receiving option (Tony Gonzalez), rushing option (Larry Johnson) and blocking option (Brian Waters), the offense might have a completely different make-up than the one that last took the field on December 28th, 2008.

The first month of the season won't be the ideal time to be working on new offensive schemes, personnel and terminology in Todd Haley's offense considering the Chiefs' foes in September. Outside of the Raiders, the Chiefs' first four games are against three elite and intimidating defenses.

The NFL schedule makers apparently aren't sensitive to a team with a new quarterback, offense and potentially #1 receiver and/or running back.

Matt Cassel was sacked 48 times last season, which when you think about it, is really amazing that he didn't miss any time due to injury. The Eagles had 48 sacks themselves last season. The Giants had 42 while the Ravens had 33.

Each of these opponents ranked in the top 11 in interceptions, with the Ravens leading the NFL. A good rushing game always helps but of course even that is up in the air for the Chiefs' offense.

The last time the Chiefs played the Ravens was in December 2006. Baltimore left KC with a rare home December win at Arrowhead, something no team had done in over a decade.

The last contests between the Chiefs and Giants and the Chiefs and the Eagles were both in 2005. You may recall that Eagles game as the game the Chiefs got up 17-0 early on, only to botch the game as Philly rallied late. That Giant game was just as memorable- the Chiefs gave up 220 yards to Tiki Barber in a losing effort. 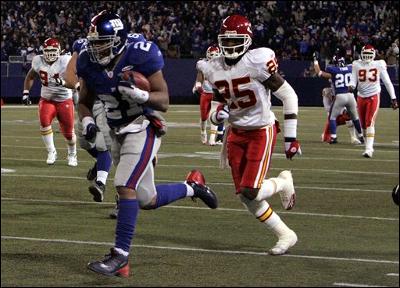 Never forget...just how terrible our rush defense was about to become. (Source)

Of course, those three losses happened as the Chiefs were on the beginning of a terrible downturn the magnitude of which nobody really saw coming.

Thoughts on the Chiefs' start to the season?