Hey guys, I stumbled across a site where Pete Carroll does a full Football Analysis of the 4-3 Under with pictures and descriptions of where the various players should slot in.  Since we're getting more and more information pointing towards this defense, I thought I'd share the info with you... 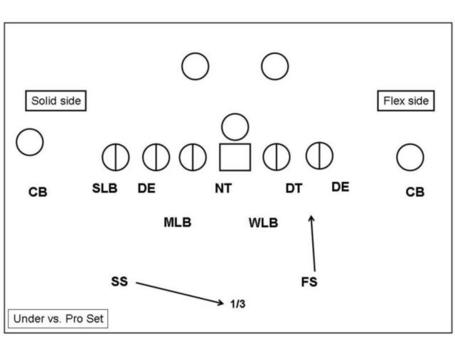 Positional/Player information after the jump...

I'll attach Coach Carroll's quotes and break down the player(s) that we can slot into those positions.

Now, we know Tank's name is written in pencil beside this position.  There were reports of Dorsey maybe sliding in here, but the double team and down blocking doesn't give me faith that he could do this, as that's similar to the position that he played last year.

The open side Defensive End has to be one of your best football players.  Size does not matter as much.  We want an athletic player who can move around.

This is where we've got a huge hole.  As he's not eating the tackle, we want a quick, athletic, 4-3 end.  Currently, we've got Tamba and Babin on the roster, but their inability to get to the QB last year tells me we need help, and lots of it.  Jason Taylor's name is being thrown around on this site, as are Everette Brown and Brian Orakpo's.

The other defensive tackle the 3 technique player should be your premier interior pass rusher.  He is going to get a lot of one on one blocks as it is hard to double team him because of where he lines up.

This is where we should write Dorsey's name in SHARPIE.  1-on-1, inside gaps...I could go over the same thing as many people on this site have, he just fits here.

The defensive end to the tight end side needs to be a defensive player that can play the run. He does not have to be a big time pass rusher.  He has to play the C gap and stop the run.

Of the guys on our roster, this one could be a few.  McBride, while lacking in pass rush, is good enough against the run to slot in here.  As this position will buckle inwards towards the guard, I think Babin/Hali would be out...but a guy like Ron Edwards might not be a bad fill.

The Mike linebacker is a traditional middle linebacker.  He is instinctive and makes a lot of calls for the defense.  He may be the guy with the most experience or the best feel for the game.

Zach Thomas.  Monty Beisel.  I'd feel better with a little depth behind that or some competition, possibly Curry, Maualuga, Laurinitas, and Ellerbe in this draft class.  DJ might be able to move here in a pinch.

The Will linebacker can be a smaller player.  He is generally protected in the defensive schemes and will not see as many blocks.  All you want him to do most plays is flow and chase the football.  We want our fastest linebacker at this position.

Of the players on our squad, DJ fits here well.  The words "will not see as many blocks" scream his name.  A guy like Brian Johnston (even though he's a DE) would be a great blitzing/speed option, although a severe liability in coverage.  DeMorrio Williams or even Pollard, maybe?

The defensive backs that are the best run defenders are our safeties.  The Free Safety is another player who makes a lot of tackles for us.  He has to have good instincts.  He is what we call a natural player.  You don’t have to coach this player too much.  He has to have a feel for the everything and understand the big picture.

So, we've got some really good fits and a couple of question marks (RDE and MLB/SLB depth) with the guys we have now, using this system.  In the end, it echoes our thoughts of needing a pass rusher (RDE) and some solid LB's.

Here's the site...the quotes I posted aren't near the extent of the article.  There's detailed gap explanations for each position in many different formations.  While it may not be exactly what we run under Pendergast, it may give those with less of an understanding of the 4-3 Under a detailed analysis as an introduction.