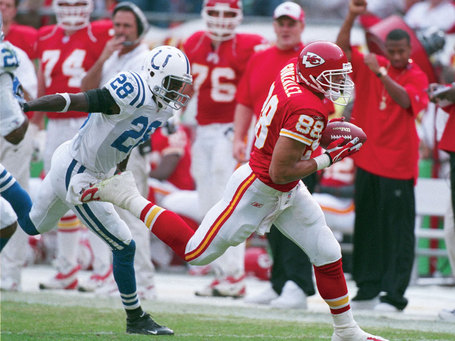 Frank Boal of FOX4 in Kansas City is reporting the Kansas City Chiefs have rejected a trade offer from the Atlanta Falcons for tight end Tony Gonzalez.  The offer was for the Falcons' 55th overall pick according to Michael Lombardi of the National Football Post.

*Boal rarely breaks news about the Chiefs and the rest of the mainstream media hasn't picked up on this yet so we're certainly going to continue following this story until we can get another confirmation.

Rumors have been swirling that the Chiefs were nearing a deal with someone to move Gonzalez.  The basis of some of these rumors?  Gonzalez cleaning out his locker.

We'll never know if the future Hall of Fame tight end was simply cleaning out his locker before the start of the Chiefs first veteran mandatory mini-camp on April 17th or if he removed his belongings with the intention that he wouldn't be back.

If the GM Scott Pioli values Gonzalez more than the Falcons' second round pick then it's unlikely any team in the NFL will match his price.  The overlord of the previous Chiefs regime, Carl Peterson, reportedly pushed his asking price from a third to a second and fifth round pick at the trading deadline last year.

We can debate about Gonzalez's worth all day long but he's worth whatever any team will offer him.  If the offers that came in last season (Eagles' 3rd, Giants' 6th) are any indication, Tony Gonzalez will not be traded by the Chiefs this season.