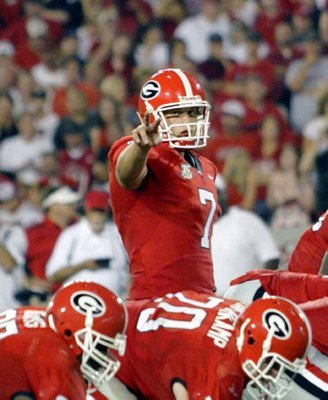 Pro Football Talk is reporting that Matthew Stafford is telling his former Georgia teammates that he will be going to the Detroit Lions.  Per PFT, Stafford is saying that he'll be getting more than $40 million guaranteed in the contract.

Stafford is calling it a "done deal."

Ever since Stafford' impressive Pro Day and reportedly even more impressive private workout with the Lions, rumors have been gaining steam that he'll be the Lions choice with the top overall pick in the 2009 NFL Draft.

This is an excellent problem for the Chiefs to have.  With both tackles rated very high, the Chiefs have a good chance to get the top rated player on their board.

PFT reported last week that the Lions were focusing in on Stafford with the contract talk being the only hang up. If this report comes to fruition, then the Chiefs will likely be choosing between a top rated tackle and Aaron Curry.

Some have wondered why the Lions would need to engage in any draft posturing since they hold the #1 overall pick.  Well, it's simple really.  If they tell multiple players that they're interested in them with the top overall pick then they can leverage the contracts against each other to get a deal done that's favorable to them.

On March 22nd, the Lions admitted they were negotiating with the top overall pick already.

Last year's top overall pick, Jake Long, signed a $57.5 million deal with the Miami Dolphins that included $30 million guaranteed.  However, with the report that Stafford is getting over $40 million guaranteed, then this tells us that the contract is almost assuredly a six year deal as opposed to Long's five.