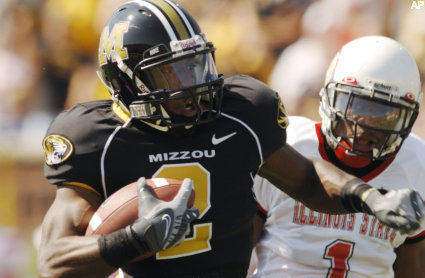 This is a bit of a shock.  From the Mothership:

The Chiefs also waived WR Will Franklin on Monday. Franklin played in 13 games (one start) with the Chiefs in 2008.

In "Don" Pioli style, this tidbit was buried at the bottom of the official announcement of the Chiefs signing of Zach Thomas.

New head coach Todd Haley has worked with wide receivers for a large part of his career so he apparently knew Franklin wasn't part of the Chiefs' future fairly quickly.

Haley excelled with much bigger receivers (Larry Fitzgerald and Anquan Boldin) than the 6'0", 209 pound Franklin.

Franklin had a productive career at the University of Missouri playing in a spread offense.  He didn't show much of anything last year with the Chiefs due partly to injuries.  Chris talked about our wide receivers just a couple of weeks ago and pretty much nailed it.

I'm on the fence about Will Franklin. I know the MU Tiger fans will jump on his "potential" but the guy looked completely lost last year. I think he'll fall into the mid-round draft selection abyss and we'll rarely hear about him.

"Completely lost" is the way I would put it too but he was only a rookie.  Partly out of curiosity of Franklin's "potential", I would rather have rather seen the Chiefs give him another shot.

Because he has less than four years of accrued service in the league, Franklin will enter waiver system meaning each team in the NFL (in draft order) will get a crack at signing him.

H/T Eric Allen in the FanShots