Share All sharing options for: Rumors: Tank Tyler as the Chiefs 3-4 Nose Tackle 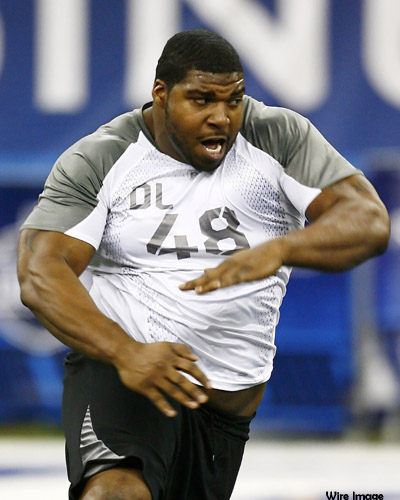 Over the past couple of weeks I've heard from more than a few people that the Kansas City Chiefs are likely to pencil in Tank Tyler as the starting nose tackle over the center in their 3-4 defense.  Nothing has been confirmed at this point (and likely won't be until the preseason starts) but after a bit more research on DeMarcus "Tank" Tyler, it's becoming increasingly obvious that this would be a good move for the Chiefs.

Tyler played the nose tackle at North Carolina State alongside an all star list of college teammates drafted in 2006 - Mario Williams (#1 overall), Manny Lawson (22nd overall) and John McCargo (26th overall) - and not surprisingly he excelled around those teammates (including two others drafted in 2006).

What's even more impressive is that Tyler actually improved after those players left for the NFL.  He performed well with that talent around him and improved when that talent left.

Tyler was actually around 323 pounds his senior year at NC State but dropped weight leading up to the Senior Bowl to showcase his agility and quickness.  Prior to the draft, he said several 3-4 teams were showing interest in him.

He said he felt comfortable playing in either a 3-4 or a 4-3 front, and believed he could excel either at the nose or in the three-technique spot. It’s telling, however, that he said he "likes" to play nose tackle; many players favor the potentially more glamorous three-technique spot and its emphasis on speed and backfield penetration. Clearly, Tyler understands that many teams see the value in an immense and immensely strong man clogging up the running lanes and occupying multiple blockers in the trenches.

Assuming Tyler is capable of packing the pounds back on to put him at the weight that allowed him to be the strongest player at the NFL Combine in 2007, it's becoming clear why rumors are flying that he's going to be the Chiefs starting nose tackle when and if they unveil their new 3-4 defense in September.

I want to stress that these are just unsubstantiated rumors at this point but Tank Tyler is an intriguing candidate to be the muscle behind the Chiefs defensive line in 2009.