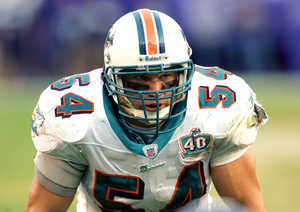 The Kansas City Star broke the news that the Chiefs signed former Miami and Dallas linebacker Zach Thomas.  Now Alex Marvez of FOXSports.com tells us that the deal is for one year, as expected, and worth $2 million.

We speculated that the deal would be worth near the veteran minimum.  However, the $2 million is a bit more than that.

Still, $2 million is worth the "mentor" aspect of the Thomas signing alone.  Chris and I crunched the numbers and are roughly projecting the Chiefs cap room to be around $34 million remaining, give or take a couple million (Note: These calculations were done prior to the Thomas signing).

We can't complain about the $2 million given to Thomas considering the Chiefs still have to spend almost half of their remaining salary cap money just to meet the minimum (about 86% of the $124+ million salary cap).

Marvez also reiterated what the Star said regarding Thomas' status on the depth chart.  It's assumed at this point that he'll be a starting middle linebacker for the Chiefs.

Marvez also said the deal is likely to be signed Monday or Tuesday.