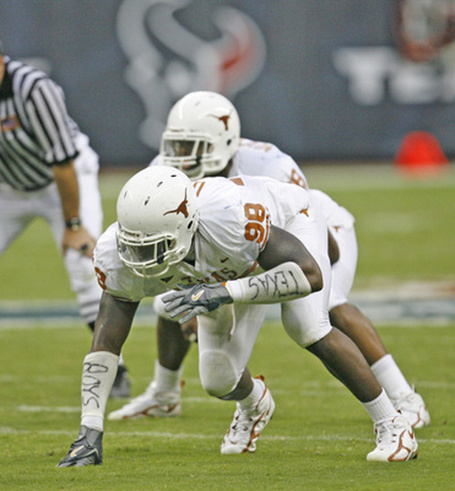 The Kansas City Chiefs brought Brian Orakpo in for a visit earlier this week according to Ed Thompson of Scout.com.

The 6'4", 260 pound University of Texas defensive end is projected to be an excellent fit as an outside linebacker in a 3-4 scheme. A lot of mock drafts, including SBNation's, sees him falling to the 5th pick, since the Cleveland Browns also run a 3-4.

Mocking the Draft tackles a few of his weaknesses:

The biggest question about Orakpo is his position. He has ideal size to be a 3-4 outside linebacker, but the strength to play 4-3 end. Doesn’t have the most awareness and can be fooled by misdirection plays. Relies too much on speed and strength instead of technique. Orakpo’s desire is questionable because it appears at time that he’ll take plays off. Needs to hustle more when a running play is past him.

Disappears at times? Sounds like Vernon Gholston last season who many of his critics compare Orakpo to.

Orakpo has to be considered a serious contender for the third overall pick even though most folks would prefer Aaron Curry. Orakpo's speed and athleticism make him an enticing pick for the Chiefs, but I would preferably not see him off the board until a few picks later in the top ten.

Take a look at his career statistics while in Austin (via ESPN.com):

Here are a few places he's been talked about around SBNation: