What are the Chiefs Getting in Zach Thomas?

Share All sharing options for: What are the Chiefs Getting in Zach Thomas? 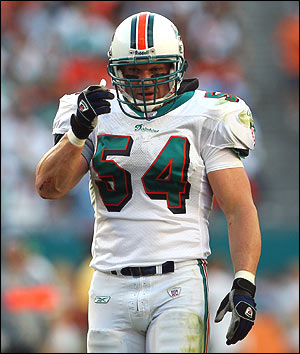 Interesting news to wake up to this morning - Kansas City Chiefs sign former Dallas and Miami linebacker Zach Thomas. We've all heard of him and know that he is, or was, an excellent 'backer for the Dolphins.

But what are the Chiefs really getting with Zach Thomas?

In a similar mold to the MIke Vrabel signing, Thomas expects to be a stop-gap in a depleted core of linebackers. His contract is likely for just a year at or near the veteran minimum.

For those that are complaining about this move, I want to remind you of a quote by Bill Belichick on signing veteran players:

"You know what you’re getting when it comes to the level of commitment of those players," he said. "They know their time is somewhat limited so you usually get a player’s best shot at that point in their careers."

Last year, Thomas played in 16 games, and started 14 of them. He had a sack and over 60 tackles. All-Pro numbers? No. Competent numbers that represent an upgrade? Yes.

Now the Chiefs are well on their way to a switch to the 3-4. With the tutelage of guys like Vrabel and now Thomas, it's becoming increasingly obvious that the Chiefs' goal this season is to add 3-4 experience to the linebackers.

Thomas isn't a world beater anymore but he's very similar to the Vrabel signing - mentor type + experience in the 3-4 defense.

Before you knock this move, ask yourself - is this an upgrade for the Chiefs linebackers?