What Exactly are Tamba Hali's Strengths?

Share All sharing options for: What Exactly are Tamba Hali's Strengths? 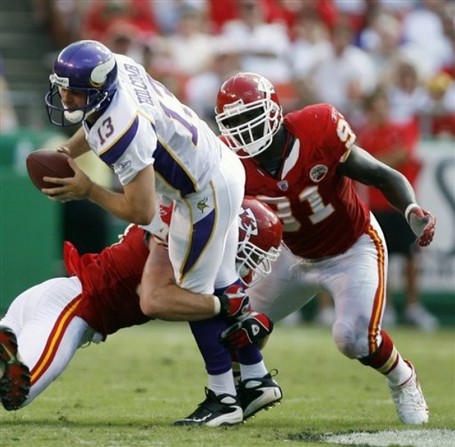 Tamba Hali...like a groupie to Jared Allen on the defensive line?

A FanShot by schraggyj on Tamba Hali a couple days ago really said a lot the Chiefs 2006 first round pick.  In the scouting report prior to the 2006 draft, NFL Draft Scout said he really didn't have the athleticism to be an outside linebacker in a 3-4 scheme.

Below is the Kansas City Chiefs 2008 directional play report.  In it, you'll see Hali lined up right AND left defensive end on defense , which in this chart correlates to the left end and right end on offense, respectively.

Take a look at the chart below (left end...#32) and trust me when I say these stats aren't likely to get much better.

Problem is, Hali didn't fare any better in 2007.  The Chiefs gave up 5.7 yards per carry to Tamba's edge in that year.  Good enough for 29th in the NFL (Hey, still an upgrade over the 32nd rank in the chart above).  And teams recognized this, too, as more plays were run at Tamba's edge than all but one team in the NFL.

If you're noticing the beginning of a trend here then you won't be surprised to hear that in 2006 he was the target of the Chiefs' opponents' 5.42 yards per carry average, which pitted Hali's end as the 24th worst in the NFL.

After one below average and two terrible seasons, it's becoming clear that Tamba's not going to "get it" as people like to say.  Judging by the statistics above, even two seasons with Jared Allen, Tamba Hali probably won't get much better in the rest of his career.

Time and time again we've noted Hali's statistical regression in rushing the passer (8 sacks, 7.5 sacks, 3 sacks). So, what exactly does he do well?

The scouting reports on him coming out of Penn State noted his run defense.  Unfortunately, his game isn't complete in that area.  In fact, Hali is well on his way to being at best a mediocre run defender that might be too small as a 3-4 defensive end but not quite quick enough as a 3-4 linebacker.

At this point of the game, Hali's going to be on the Chiefs roster as the 2009 season commences in September.  But I'm willing to bet he won't be around much longer.  His contract calls for base salaries of $940,000 in 2009 and $1.31 million in 2010 so the Chiefs can likely release him at any time without being handi-capped by the salary cap.