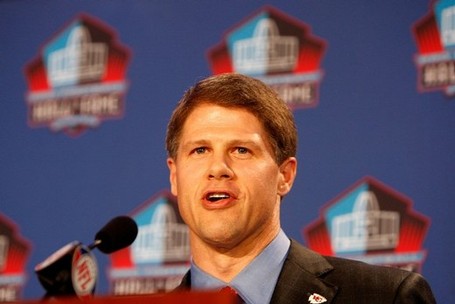 Robert Boland of the National Football Post recently ranked all the organizations across the NFL. The list wasn't based on money ala the Forbes list (17th most valuable as of September 2008), nor was it necessarily based on success on the field.

Boland calls it organizational symmetry which is based on three criteria:

Because the most profitable teams have the most favorable stadium relationships, much of the money a team can generate over and above the television share is related to the stadium.

The Chiefs' management team has done an excellent job of A) maintaining a stadium that interests plenty of folks based on the historical aspect alone, B) updating the stadium on par with the rest of the League's new homes and C) convincing the public to help pay for the stadium.

The owners who work closely with their coaches, player personnel staffs and senior leadership, not overwhelming them but being informed by them, clearly enjoy the greatest advantage.

Clark Hunt, GM Scott Pioli and Todd Haley resemble a three headed monster. All major decisions within the organization are determined by Pioli and Haley with Hunt being informed along every step of the way.

Maintaining a compact with the customers (fans)

So while fans are especially loyal consumers, they are not simply satisfied by normal service; they demand that the owner understand and honor their bond to the team.

Chiefs' fans are among the most loyal in all of the NFL. Yes, the attendance in November and December last season was bleak but the Chiefs brand is still among the elite in the NFL. Considering the small market of Kansas City, Clark, and largely his father, have done an excellent job establishing this connect.

With these criteria in place, Boland ranked Clark Hunt 11th in the NFL.

His late father Lamar Hunt would have rated comfortably in the first tier. Yet Clark Hunt showed great promise in winning the battle for GM Scott Pioli this offseason and taking decisive action in remaking his franchise. He will also have an updated stadium, so while the jury is still out, Hunt shows promise.

Clark has big shoes to fill considering his father's name is on the AFC Championship trophy but he's off to an excellent start managing the franchise on his own.

Hunt has the right mindset entering the first decade of his ownership and I am confident he will be among the League's elite owners entering his second decade.