Share All sharing options for: Chiefs, Larry Johnson to Meet Over Contract 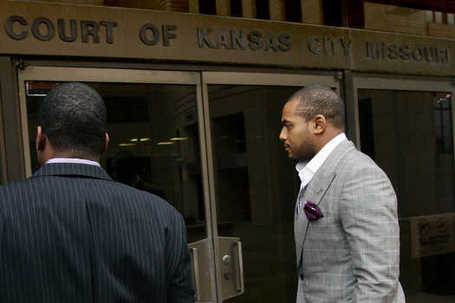 Kansas City Chiefs running back Larry Johnson and his agent, Peter Schaeffer, will meet with the team next week regarding $3.75 million of guaranteed money.

Per Adam Teicher of the Kansas City Star:

The Chiefs claim the one-game suspension he received from the NFL last year for violating the league's personal-conduct policy is a breach of his contract and frees them from having to pay the guaranteed money.

A source close to the situation told Teicher that should the Chiefs win the grievance and thereby releasing them of any obligation to pay him the balance of the guaranteed money, they'll likely release him.

The source suggests that the Chiefs wouldn't go through the trouble of a grievance hearing if they intended to keep him.

From my view, the outcome of the hearing may not matter. If the Chiefs are going through the trouble of freeing themselves of the obligation of paying him, then they likely want him gone regardless.

When taken in context with the salary cap and the Chiefs $25-30 million left in salary cap room, $3.75 million to release a guy who apparently doesn't fit with the program is money well spent.

What will be interesting is to see if Johnson shows for the start of the Chiefs voluntary offseason program on Monday. Schaeffer says he'll be there.

"Right now Larry's focus is preparing for the upcoming NFL season," Schaffer said. "He's a member of the Kansas City Chiefs, so he's doing everything in his power to help the Chiefs win the Super Bowl. So he will be there."

Looks like next week will finally begin to shed some light on the Chiefs' plans for Larry Johnson.