Another View of the Chiefs' Veteran Free Agent Signings

Share All sharing options for: Another View of the Chiefs' Veteran Free Agent Signings 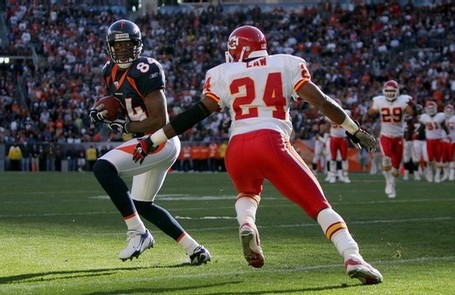 I've always been a fan of signing veteran free agents over younger, "upside" type players.  Call me a realist but if you present me with a known and an unknown, I'm going with the known every time.

With a veteran you know what you're getting.  Yeah, there's not as much upside or potential there, they're usually not diamond in the roughs, but at the same time you're spending more time working on schemes instead of the particulars about the positions.

Maybe it's all the years of Carl Peterson that have me brainwashed into thinking veterans like Ty Law really are the final piece we needed to get over the hump.  In fact, take a look at this quote from Chris July 26th, 2006:

In 2006, Ty Law brings the same hope and excitement that KC felt when the Comeback Kid came on. If you're not excited, then talk to my brother who declared last Sunday Ty Law Day and threw on his Zubaz.

I'm the brother, and yes, I did declare it Ty Law Day (along with Jason Whitlock).  Embarrassing now, but what can I say, I'm partial to veterans. [Ed. note: Chris is also embarrassed by that. It was my first day blogging!]

As the Chiefs transition from the Herm Edwards era youth movement to collecting, as Scott Pioli says, a team of football players, a few of these free agent signings remind me of the way the Patriots did things during the Pioli/Belichick era.

Look at the Patriots this offseason - Shawn Springs?  Not much time left but still a viable player for the 2009 season.  Bill Belichick talked about why he was willing to collect veterans:

"You know what you’re getting when it comes to the level of commitment of those players," he said. "They know their time is somewhat limited so you usually get a player’s best shot at that point in their careers."

I've always looked at adding players, regardless of age, in a talent vacuum.  Is this player better than what we've got right now?

Belichick's reasoning that veterans have added motivation because of their limited time left is excellent insight into what guys like Bobby Engram and Mike Goff will mean to the Chiefs in 2009.