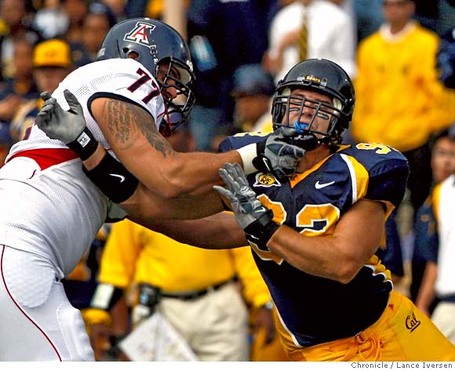 An offensive tackle for the Wildcats, Britton is a three year starter that brings a lot of size and power, particularly in the run game.  At 6'6", 310 pounds he's skilled enough to play either tackle position but according to Mocking the Draft's scouting report on him, right tackle may play to his strengths.

May not have the great foot quickness that’s required of a left tackle. Needs to slide his feet better instead of taking small steps. Benefited from playing in a wide-base spread offense where he was standing up off the snap. Marginal lateral agility.

He has experience playing on both sides of the line, having started at right tackle in '06 and '07 before shifting to the left side his senior year.

No questions in the durability department. He's started 37 consecutive games for the Wildcats.  This is very pleasing to hear considering the logistical problems that come with a 300+ pound body jarring into opponents 50+ times a game.

He's got all the characteristics Scott Pioli wants - big, strong, smart and disciplined.  We know the Chiefs like the mentoring, Mike Vrabel types.  From NFL Draft Scout:

Quality person who gets very good family support. Articulate and modest. He is an unselfish type who will not hesitate to help other teammates digest the playbook. He is probably the most respected player on the team and one the coaches usually use as a leader for recruits to follow.

Possibly the most interesting part of this workout is that Britton is projected to be a mid-first rounder.  Nowhere near the Chiefs first (#3 overall) or second (#67) picks.  Can we read anything into this?  Probably not.  Instead this is likely due diligence on the Chiefs part.

Though it's no surprise to any of us who have looked at Pioli's history, this is a clear indication that the Chiefs are willing to part ways with the third overall pick - for the right price.

Eight offensive line coaches showed up to his Pro Day to watch him work out.