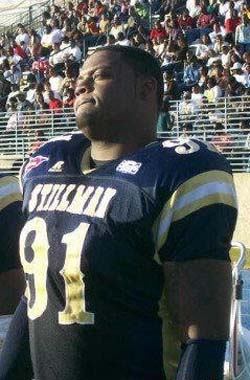 The Kansas City Chiefs met with Sammie Lee Hill, a little known defensive player from Stillman College in the Southern Conference according to profootballtalk.com.

Hill played defensive end for Stillman and apparently is one of the most versatile (thanks, Kris Wilson) players his coaches have seen. I know what you're thinking...Stillman isn't exactly an NFL factory like the other school in Alabama.

But check out these numbers from the NFL Combine and tell me he doesn't catch your eye like he did the scouts who originally noticed while scouting another player last season.

They're not the best numbers at the Combine but still impressive when you consider the majority of his counterparts were playing on national television on Saturdays.

His 6'4" 329 pound build makes him a very intriguing prospect for the Chiefs.

Both, apparently.  He's certainly got the size to play the middle in the 3-4.  The Stillman coaches placed him at defensive end so they could shut down half the field in the run game.

Why wouldn’t he be? Mostly, because he could have been the next Shaq O’Neal. He had serious skills as a basketball player. And for all his size, Sammie Lee can jump. He can also play linebacker and tight end. He even played kicker. Oh, yes, and a little DT.

The buzz word around this polite young man (interview here) has been his versatility and his athleticism. But it's his character and selflessness that put him on the national scene last summer.  Just remember, Tony Gonzalez isn't the only one who can save someone:

Just one night on our way home, we were seeing a burning house on fire.  My teammate told me to turn around, because someone might need help and, sure enough, there was a lady outside saying that her father needs help.  All we could do was put our hands over our faces and hope that we didn’t get hurt.  We looked up, and, well, it was a blessing that we could grab him and protect ourselves so we all were safe.

He has other visits scheduled with Jets, Eagles, Bucs, Chargers and Steelers.  He's already met with the Rams and, you guessed it, the Patriots.

If anyone knows more about Hill (there's limited information about him on the internet), chime in in the comments.