Haley Says Chiefs WRs 'Have a lot of work to do'

Share All sharing options for: Haley Says Chiefs WRs 'Have a lot of work to do' 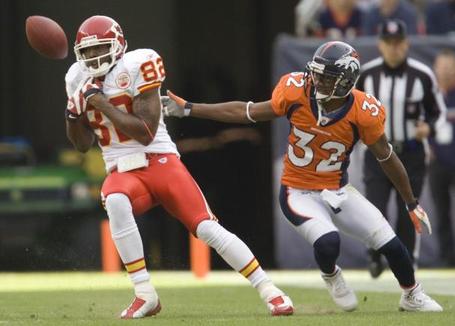 No way Bowe makes that catch.

Todd Haley addressed the media at the NFL Owners meetings in Dana Point, California this afternoon. We've already discussed a couple of the topics owner Clark Hunt covered earlier in the day (LJ/TG/Waters here and Hali/Dorsey here), but this is the first time we've heard from Haley in California.

First, he addressed the Bobby Engram signing. There were plenty of folks, including the guys at the Red Zone, who were clamoring for the Chiefs to sign free agent and former St. Louis Ram Torry Holt.

Holt, who specializes on the outside, didn't fit the Chiefs need which was slot receiver.

"We don’t really have anybody on campus that is that inside receiver, so to speak. That’s a big thing for the offenses I’ve been involved in."

The need for Holt wasn't as dire as some of those in the media made it out to be as Haley also said he liked what he saw from Mark Bradley when he scouted him coming out of the University of Oklahoma. With the Dallas Cowboys at the time, Haley thought he would have a shot at drafting the former Sooner.

"We rode back on the plane coming back from the combine. I remember talking to him and he remembers it. He has ability."

Even with the slightest of sophomore slumps, Dwayne Bowe is still the #1 wide receiver on the depth chart. Despite his abilities, Haley says the Chiefs may not be done in the wide receiver department, especially considering the talent worked with in Arizona.

"But we’ve got a lot of work to do there. That’s obviously an area I keep my eye on pretty heavily."

And keep an eye on it he will as the Chiefs have scheduled a private workout with Arizona Wildcats* wide receiver Mike Thomas on April 3rd according to Scout.com.  More to come on Thomas in the morning.