Hunt: Dorsey, Hali will have a Role with Chiefs

Share All sharing options for: Hunt: Dorsey, Hali will have a Role with Chiefs 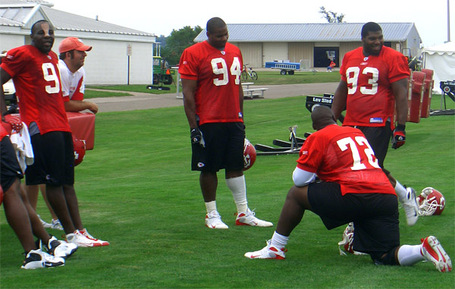 Though he ultimately said the decision is up to the new coaching staff, Kansas City Chiefs owner Clark Hunt said a pair of first round picks, Tamba Hali and Glenn Dorsey, will have a role to play with the 2009 Chiefs.

Hunt's words, courtesy of Adam Teicher at the Red Zone:

"I believe they’re both fine players and will have a role," Chiefs chairman Clark Hunt said. "But that’s probably putting the cart before the horse. That’s a decision for Todd (Haley) and the coaching staff to make and not one for me to make."

It would be a shame if the Chiefs couldn't find roles for two (TWO!) first round picks in the last three years. The Chiefs investment in Dorsey is much, much larger than Hali's.

A lot of folks, including Pro Football Weekly, say Dorsey and Hali would become "obsolete" in a 3-4 defense.

Dorsey is not expendable. He's not going anywhere for a minimum of two more years. For a defensive lineman his cap hit is affordable and certainly worth the risk. He has base salaries of $385,000 in 2009 and $983,000 in 2010, combined with $22.5 million guaranteed pro-rated over five years.