And with the #13 Pick in the Arrowhead Pride Community Mock Draft, the Washington Redskins Select...

Share All sharing options for: And with the #13 Pick in the Arrowhead Pride Community Mock Draft, the Washington Redskins Select...

Alas, Michael Oher makes too much sense. We wouldn't call Oher a steal at 13, but we wouldn't be shocked if he gets nabbed for real before this. Needs-wise the 'Skins are kinda the bizarro Chiefs (nice uh, spearhead logo, ahem). Seriously, besides having a lunatic profligate calling personnel decisions, hot cheerleaders, a huge fanbase with no dedication, and a running back whose still productive and keeps his antics to press conferences and car commercials, and you know, a winning record, they're just like us. They could us a pass rusher, but then they just spent twice the GDP of Albania to pick up Haynseworth and they desperately need to get younger on the O-line (maybe the bizarro '07 Chiefs). Jason Campbell is just "meh" enough to snuff out the Culter to DC talk and generally all around their just "stout" enough to win enough to be in Wild Card contention and have their fans lose all interest by week 12.

At this point most of you probably know Oher's story - muy inspirational - bud did you know his name is an anagram for "Miracle, Eh Oh!"? Other than that, not too much to add. Oher's probably the most scout OT prior to the draft season. He had a lousy combine so he's dropped a little, but he's been characterized as the anti-Andre Smith, not as much raw talent but all work ethic and maturity.

Both are a little undersized for first round OTs, Oher's about 6'4" 309, so he's not tiny, but both are real "smart" footbal acumen guys. Tom Lemming at ESPN compared him to Orlando Pace, we won't go there but he'd likely be a great choice if the Chiefs traded down and this was the board. He'd probably also fit well potentially at G or RT.

Bonus Benefit: Eastern Motors could run a new commercial with him and Haynesworth called "Slumdog & The Millionaire."

Until then, take it away Alex Ovechkin:

On the clock for tomorrow: New Orleans Saints (cmpotter) and Houston Texans (ChiefDude)

Click over for the schedule, current draft results and the picture that The PARADE orginally wanted to use in this post.

Darn near every mock draft has the Redskins taking an offensive linemen. Works for me. Oher is the best tackle left on the board. 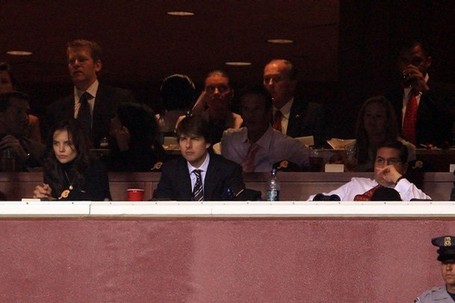